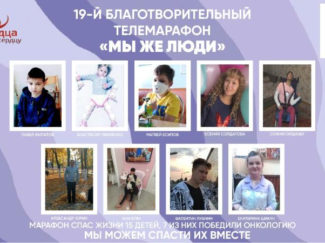 On December 25, 2021, Borisoglebsk hosted for the 19th time an event that unites residents of the Borisoglebsk city district and caring people from different parts of the country – the charity telethon “We are people”. The organizer and ideological inspirer of the action is Elena Vasilyevna Fominykh, General Director of the Borisoglebsk media holding. In 2021, the marathon was held online.

The telethon annually raises funds to help children and adults in urgent need of treatment or rehabilitation. JSC “Teplohim” is always an active participant in the marathon and this year we have become official partners. The representative of the company’s staff and general management was the head of the legal department Artemyeva Svetlana Alexandrovna, who expressed words of support to the wards of the telethon, wished good health and a speedy recovery, and also expressed gratitude to the creators, curators and everyone who took part in this charity event.

The staff of the enterprise collected and transferred funds to the bank account of the charity fund “We are people” by the OR-code.
For the general management and the staff of JSC Teplohim, charity is a sincere act of goodwill and a kind heart, which a person needs in a difficult moment.