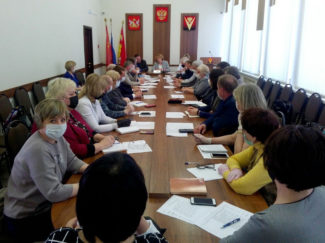 On April 30, the first plenary session of The public chamber of the district of the VI convocation took place in the small hall of the administration of the Borisoglebsky city district. Before the meeting, the formation of a new composition of the Public chamber was completed.

One of the 9 candidates approved by the BGO administration as part of the Public chamber is Vladimir Vyacheslavovich Kolomiets, General Director of JSC Teplohim

Head of the administration of the Borisoglebsky city district A.V. Pishchugin congratulated all members of The public Council of the VI convocation on their election and wished them successful and fruitful work.